Considered one of the finest Pre-Revolutionary War historic estates in the USA, Tulip Hill circa 1756 is a grand Georgian plantation house built by Samuel Galloway, beautifully preserved and restored on nearly 53 acres that includes water frontage and pier. Elegant and historically significant, with expansive terraced gardens and grounds. This is a home of rare and beautiful distinction.

The central block of Tulip Hill, located in Anne Arrundel County, Maryland, approximately 2.5 miles west of Galesville in State Route 468, is a finely designed and little altered example of an early southern Georgian plantation house. Erected in 1755-56, its basic plan and design are typical of the great Georgian mansions of the mid-century, but its experimental approach to late Georgian formality in certain decorative features gives it distinctive character which adds interest to its detail. With the wings and hyphens added between 1787-1790, Tulip Hill is also a very distinguished example of a five-part composition country house. Sitting on a rise of land, the impressive approach to the house from the river by a tree lined lane through the meadows and into the terraced garden exists today as it did over 200 years ago, maintaining the original site and environment. This offers today’s visitor much the same impression as it did in the eighteenth century.

History
Samuel Galloway, a Quaker merchant-planter, purchased the old Talbot patent of “Poplar Knowle”, 260 acres with water frontage on the West River and Browns Creek, in 1755. He named the property “Tulip Hill”, retaining in this new name the distinctive feature of the grove of grand tulip poplar trees, many still standing with ages up to 300 years. Letters reveal that the central block was well underway in 1755-56, under the direction of John Deavour. The architect is unknown, but the interior floor plan pf the house bears a close relationship to Stenton, at Germantown Pennsylvania, built by Galloway’s Quaker friend, James Logan. The interior of Tulip Hill has been attributed to the young carver, William Buckland, on the basis of motif and reference in a document that Galloway borrowed a carver from Gunston Hall, where Buckland is known to have been working at the time, but no firm evidence has been found to fully substantiate this theory. In 1787-90 John Galloway, Samuel’s son, enlarged Tulip Hill into its final and present five-part form by adding two end wings, to connecting curtains, and also the present portico on the north (land) front of the central block. The plantation house remained in the possession of the Galloway family until 1886. After passing through several ownerships, the mansion was rehabilitated and continues today as a private residence.

Description
Located at the edge of a high plateau, with the land falling rapidly away on three sides, Tulip Hill is a five-part composition with a full stone basement under the entire structure. The central block, two full stories, with a high unfinished attic and double hipped roof, is 52 feet wide and 42 feet deep. The two brick end wings, built at right angles to the main axis and measuring 20 x 24 feet, are two stories of lower height than the main house. Both have gabled roofs with a single chimney located in the center of the outer side walls. The two brick connecting hyphens or curtains, each 19 x 19 feet, are of one story with very low attic space and are covered with gable roofs that have small dormers. The walls are decorated with brick pilasters which extend to the height of the windows where they visibly support the brick stringcourse. The roof of the central unit is dormered on the rear, or river elevation and on the ends. The brick walls of the main house are laid in Flemish bond and the walls of the wings and hyphens are laid in running bond. The central unit has a rolled brick water table and a belt course at the second floor level. Over this unit rises two high, arched and vaulted chimneys, somewhat reminiscent of the more massive stacks at Stafford, Virginia (1725-30). The north or land façade of Tulip Hill is particularly interesting because of its somewhat experimental approach to late Georgian formality. There is a central pediment but no projecting pavilion beneath it. A round window with unusual flanking decorative panels adorns the pediment, and the main cornice is modillion in front only. The center door is topped by a rectangular transom, sheltered by a one story portico that was probably added about 1787-90. The pediment of the porch, supported by four columns, contains a carved figure of Cupid. The brick wall between the end pilasters of the portico is plastered and painted. Over the rear center door is an interesting cantilevered hood carried on boldly projecting carved consoles, plastered inside its arched head and adorned by curious crockets on its raking cornices. It has a carved conventionalized tulip as its finial. This recalls, in a more elaborate form, the plainer town pents used over many doorways in Philadelphia. Windows on both floors of the central block have nine over nine light sashes, but those on the second floor are reduced in height.

In plan, a broad un-paneled off-center front hall is lighted from the window to the right of the front (north) door. The fully paneled stair hall at the rear is narrower on axis. In this rear hall is an exceptionally fine carved walnut staircase, with scrolled step ends and handrail, winding around an offset newel post in the bottom. Paneling on the wall echoes the contour of its gracefully curved banister and fluted end posts. A visual separation between front and rear hall is achieved by an unusual double arch without a supporting post in the middle. The free hanging impost of the arches is adorned by a tulip ornament and hanging candle light, not unlike the carved pendant in a similar position in Gunston Hall, Virginia, designed b William Buckland at this sale time.
To the right of the stair is a very fine corner cupboard with a large carved shell ornament. To the right of the front hall is a small un-paneled reception room and in the rear, also to the right of the stair hall, is a larger un-paneled dining room. These two rooms are connected by a small passage from which, against the interior chimney, arises an extremely narrow service stair, as at Stenton.

Tulip Hill and Stenton seem to be the only houses of their time and dimensions in which this feature is found. Galloway spent much time in Philadelphia with his relatives, the Chews of Cliveden, and friends, the Logans of Stenton. On the left side of the center hall ase two large and fully paneled drawing rooms, each about 20 by 17 feet in size.

The first floor plan is repeated on the second floor, except that an additional room, a small chamber, is located at the end of the hall. The two large bedrooms on the east side of the hall are fully paneled. The fireplaces in the central block are faced with either Dutch tile or marble and are framed with wood paneling. The windows have jeep paneled jambs and soffits, with architraves to the floor. The jambs are splayed and there are deep window seats. The doors, paneling, floorboards, and stair treads are of pine. Most of the hardware is original. The west (right) wing contained the kitchen and service rooms, and the east wing, the plantation office. Before construction of the wings, kitchen and other services areas were located in outbuildings as confirmed in Galloway’s papers. Today only the foundations of the old ice house, which is partly supporting the garage, exist. The house was little altered during the nineteenth century and has never undergone extensive restoration.

The boundary of Tulip Hill has been drawn to include all of the remaining land, about 54 ½ acres. This includes both the original river approach from the house and terraced gardens to the West River and the original land approach through a gateway on the old Muddy Creek Road, now State Route 468 and part of a system of roads established around 1695 as Annapolis developed. The curving drive still winds through many original poplar, fir, and beechwood trees to the house. 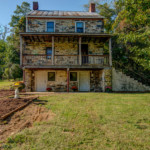 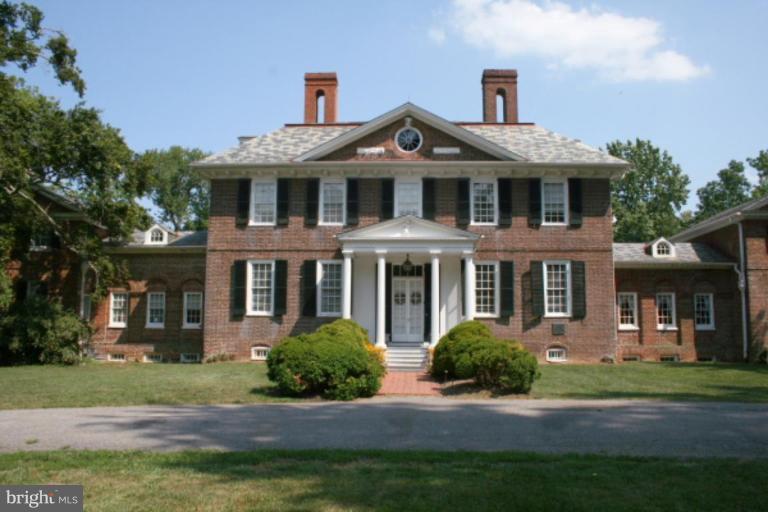 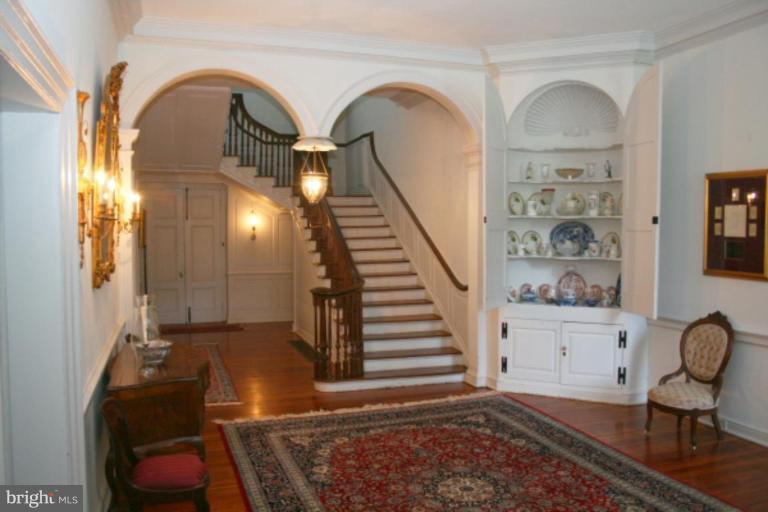 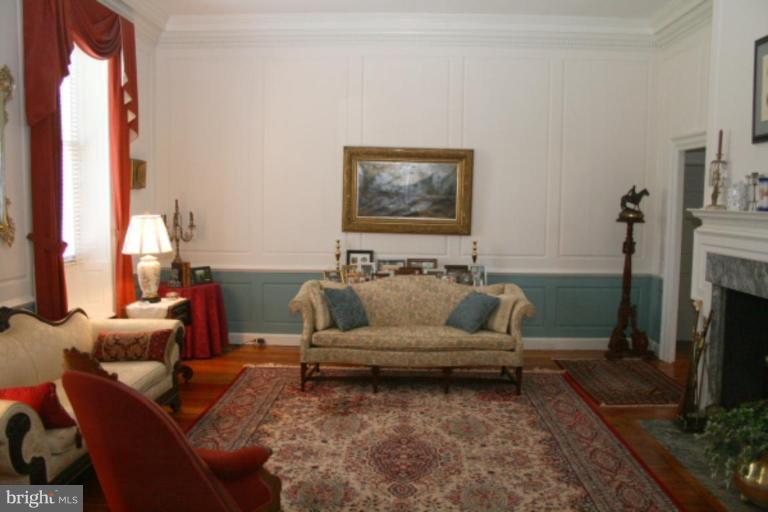 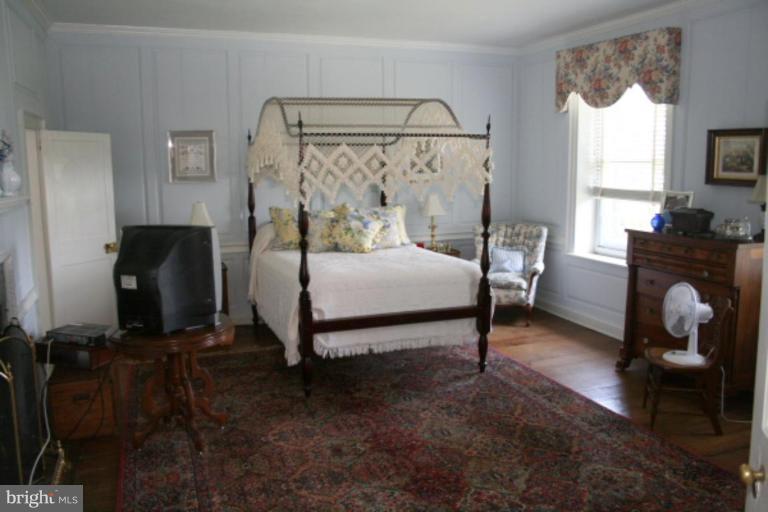 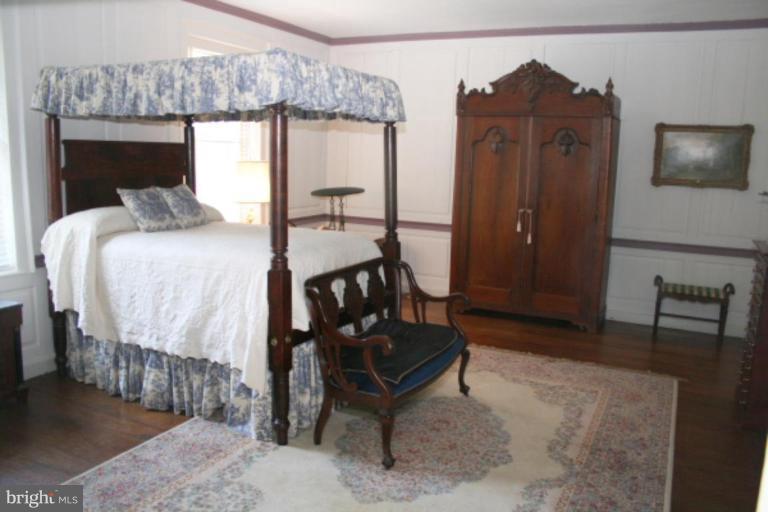 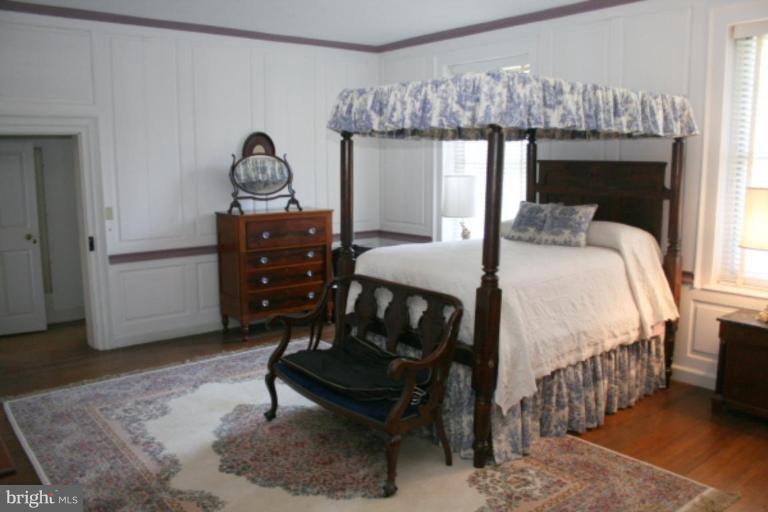 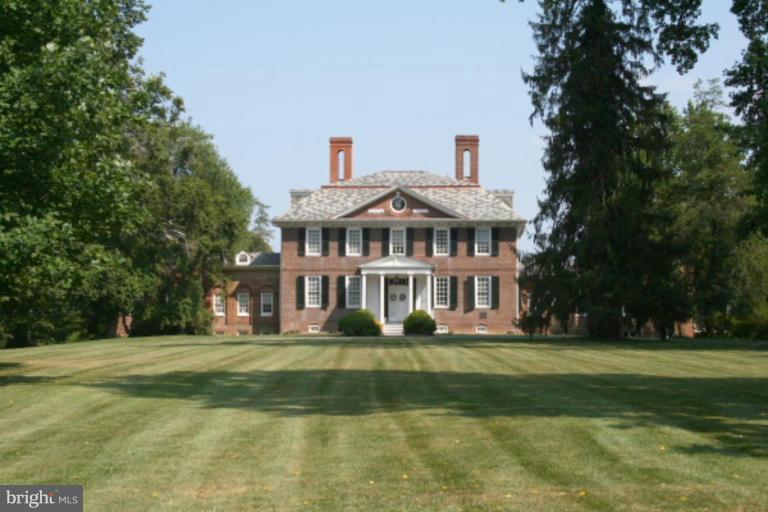 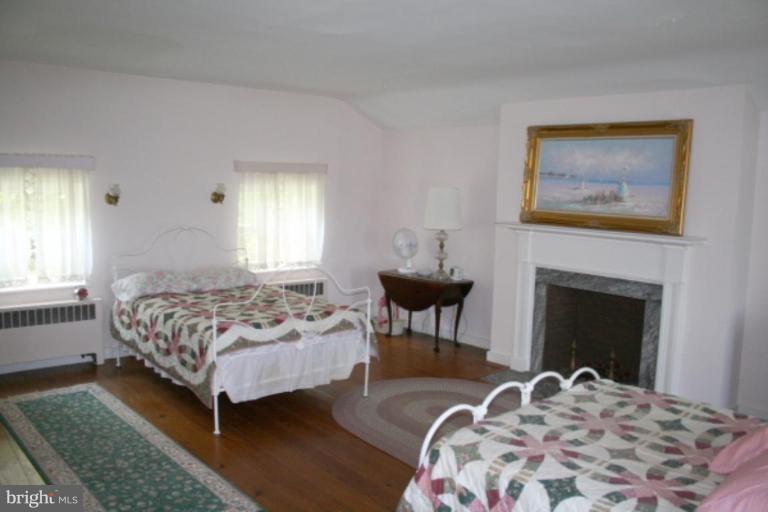 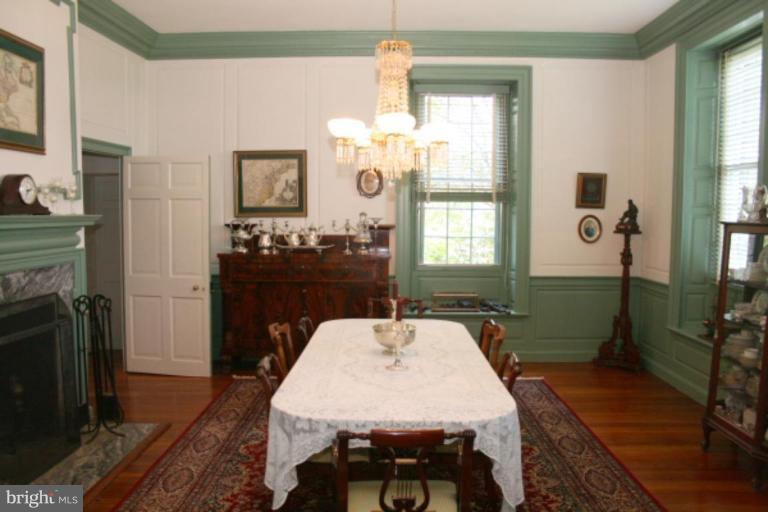 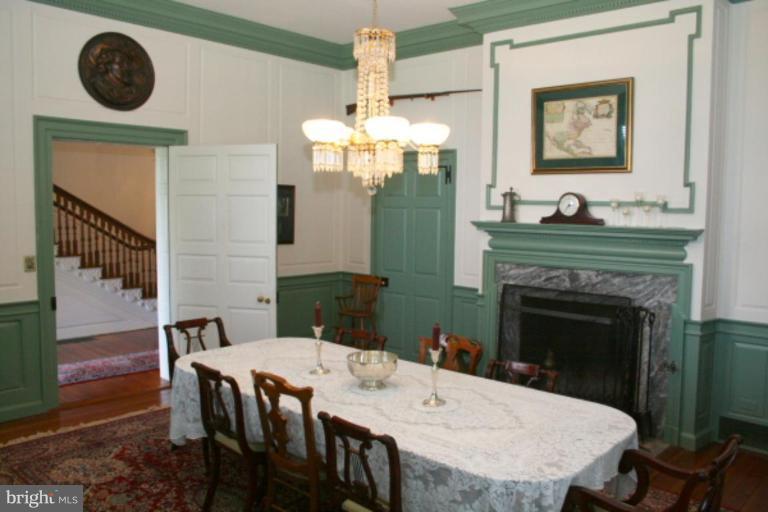 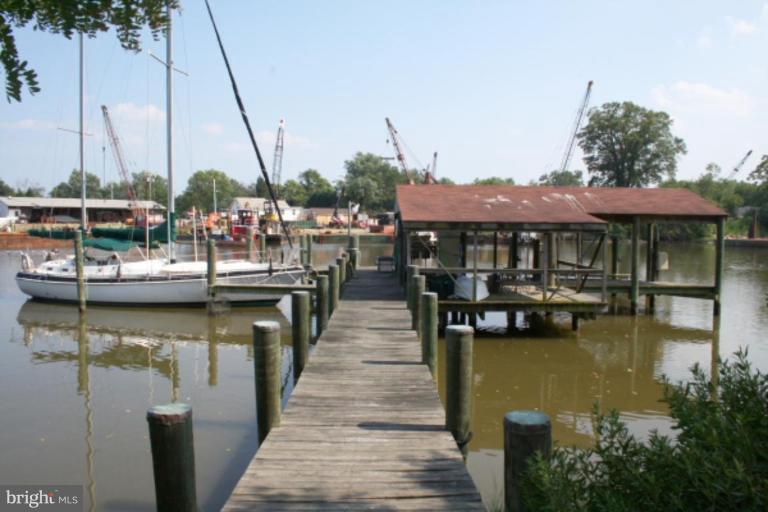 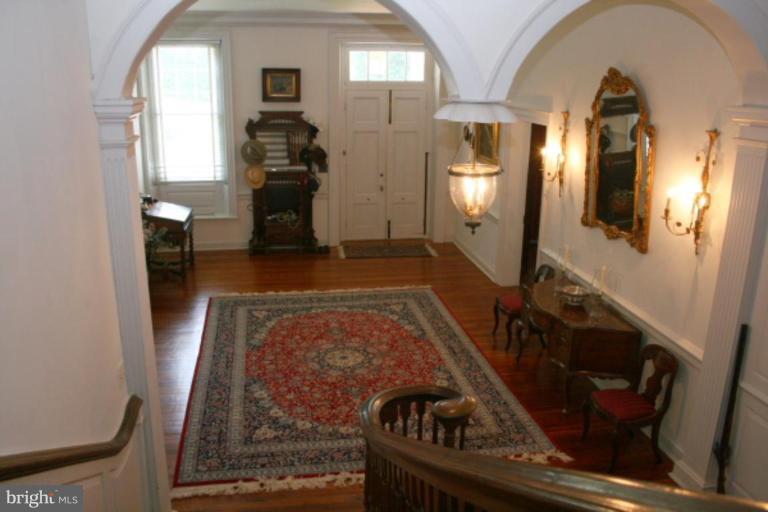 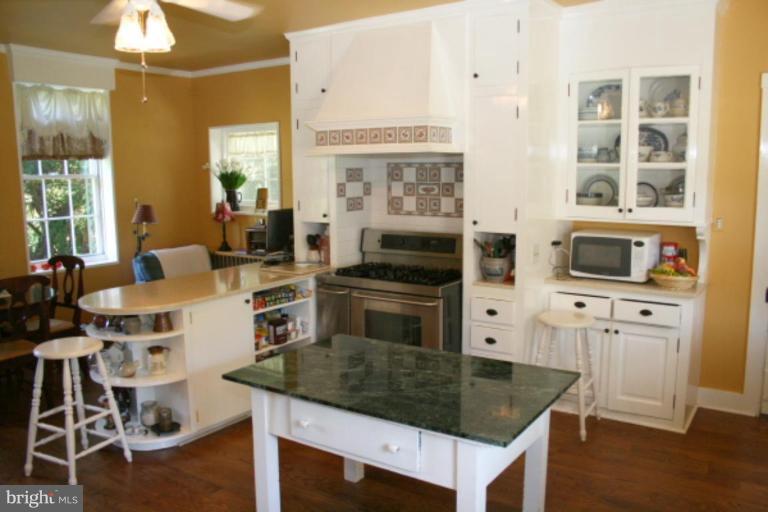 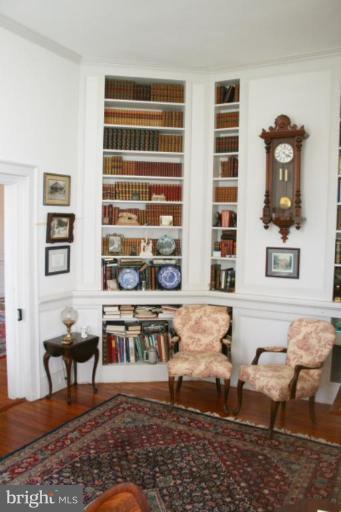 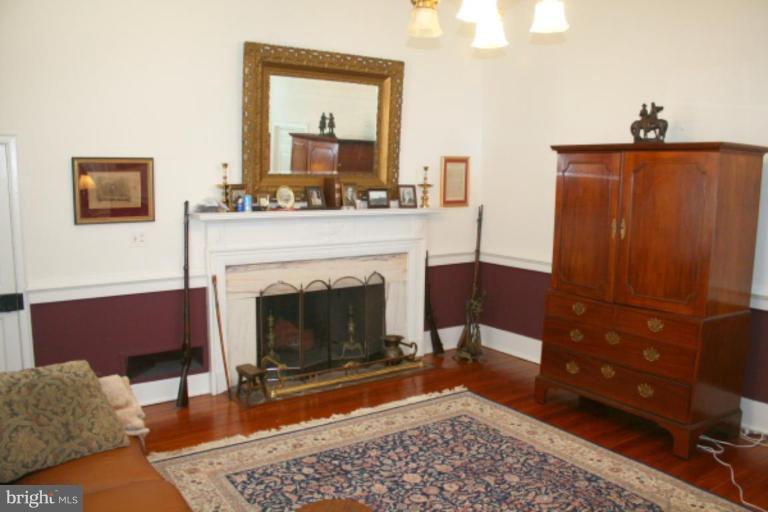 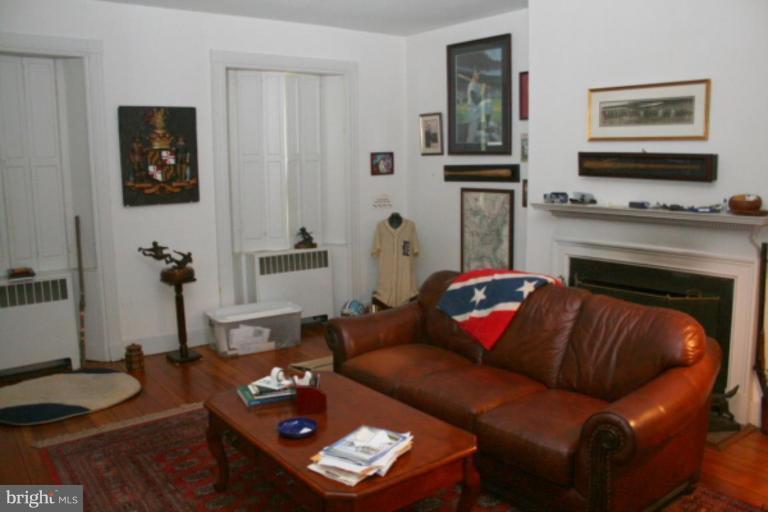 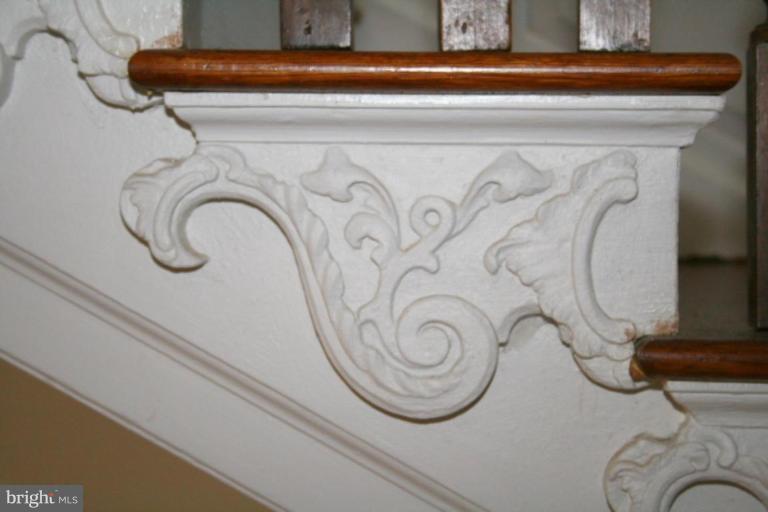 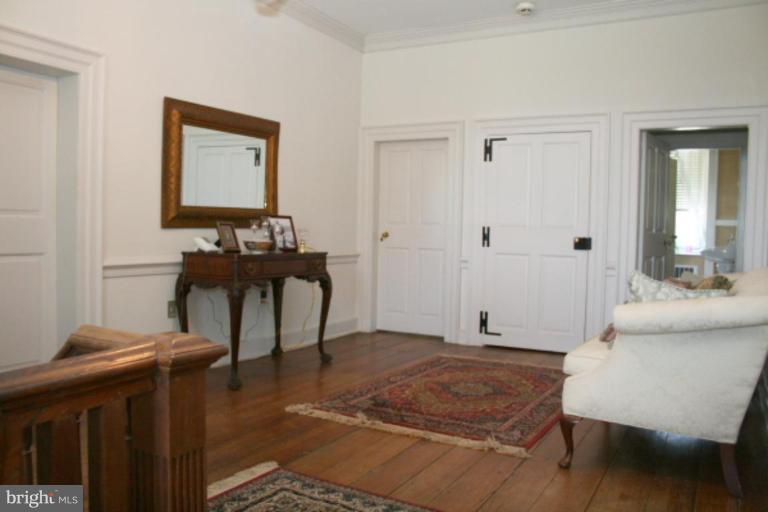 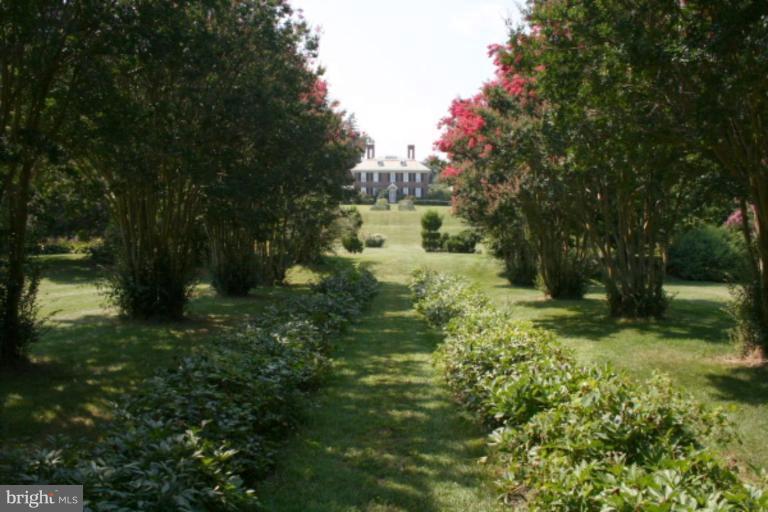 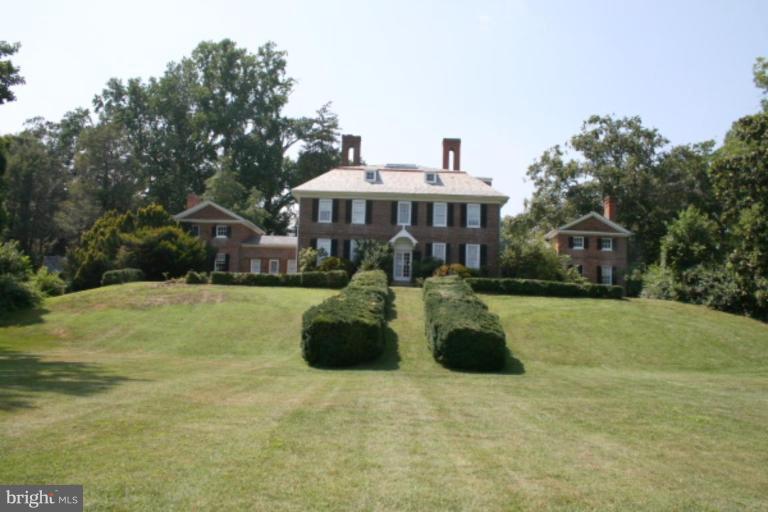 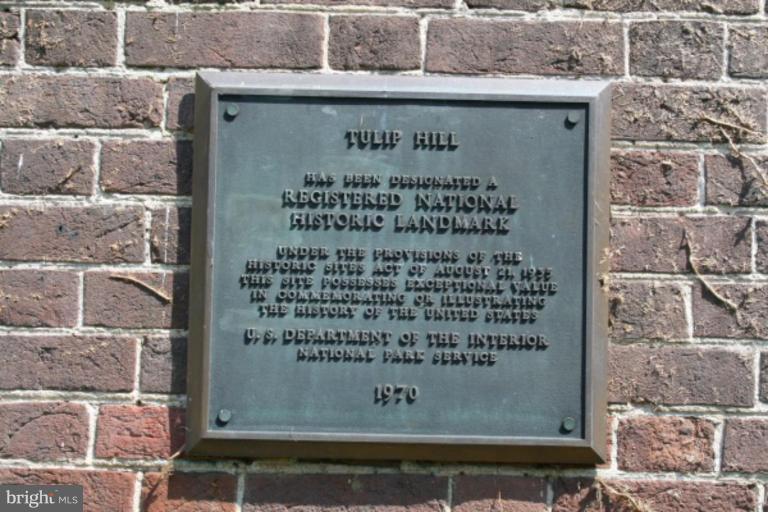 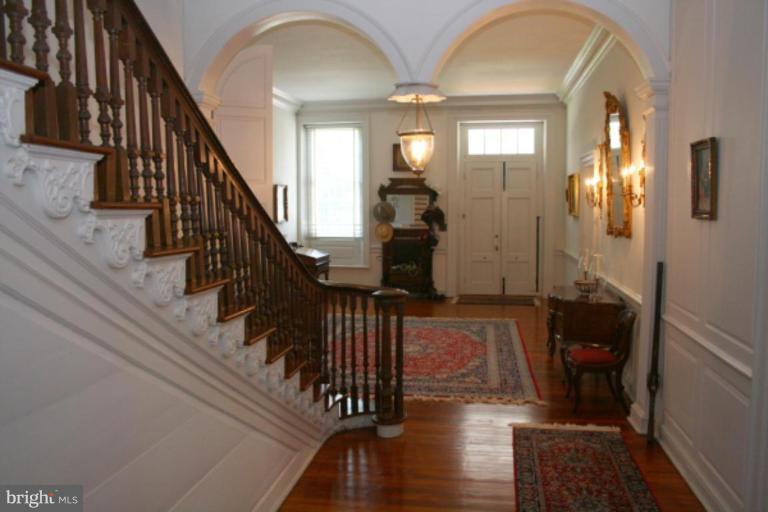 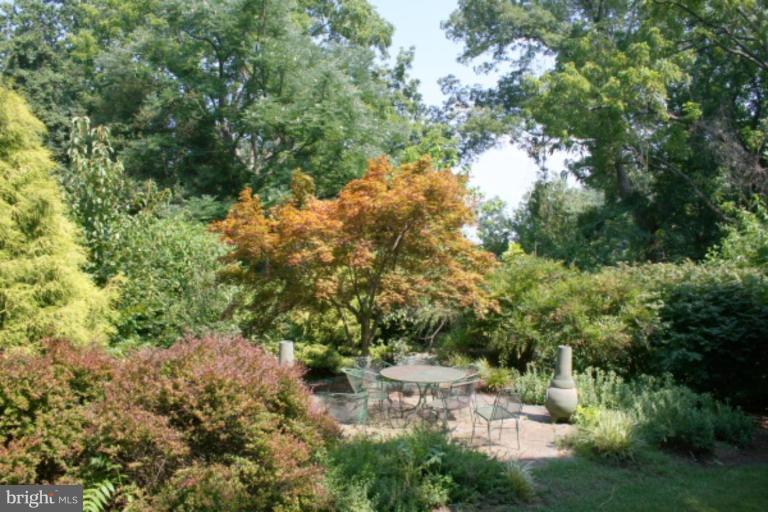 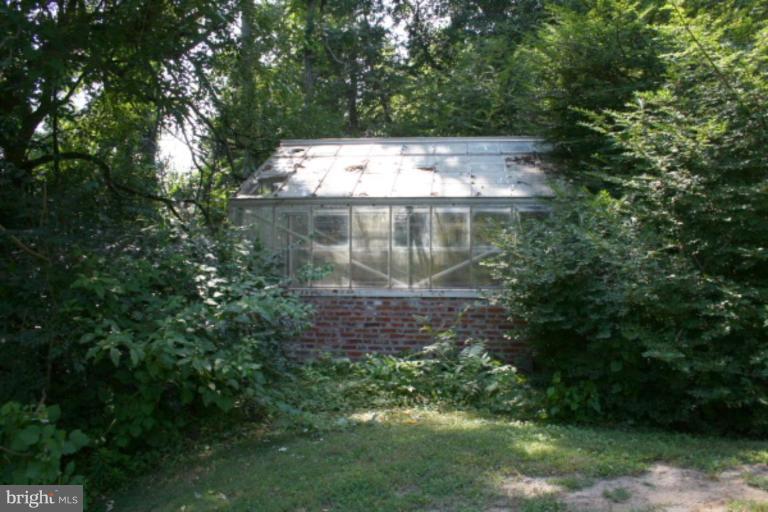 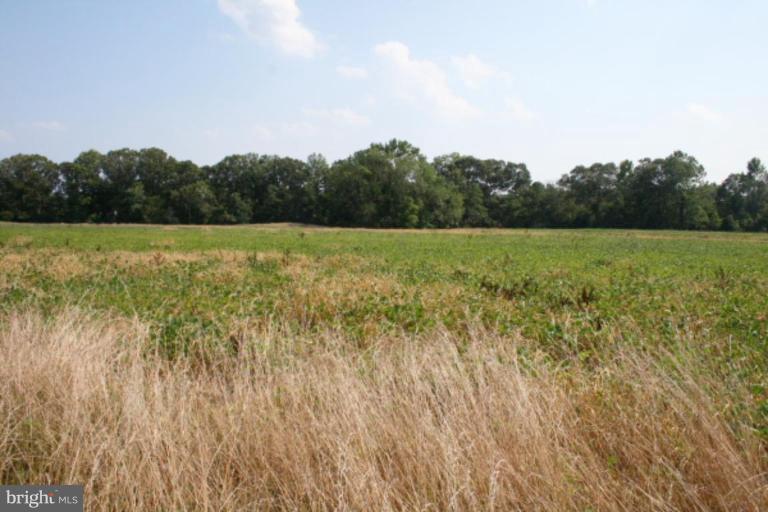